everything after instills is not correct sorry

schlobodan said:
everything after instills is not correct sorry
Click to expand...

Good thing I put "I'm not positive" - care to elaborate?

thefitz said:
Aliens have pointy lower bouts. Rockbass versions do not. This is another example of the confusion putting a 'W' on the headstock of a Rockbass instills.

I'm not positive, but I do not believe Lakewood made 5/6 string versions. The rosewood soundhole surround and thumbrest are also exclusive to Lakewood, I believe.

That string spacing gets me every time :evil::roll:

sorry for my short answer - I was on Iphone only. And my answer was not correct there was more things correct in your statement. Sorry for that.

Here I am NOT talking about Rockbass models that have always been produced in China have the rounded lower horn and no thumb rest or soundhole decoration.

As for the fullblown Alien models:

Lakewood has nothing to do with recent Aliens (As German builder of acoustic Guitars they designed the model for Warwick and produced only one run of approx 100 instruments in 1991. The design was exclusively 4 string.

10 years later the model was revived and production was done in Vietnam, with slight changes (still 4 String only)
Changes where for example: no more solid top, other pre, no wenge stringer in the neck, rosewood fb instead of wenge, no Jan1, different piezo bridge. For a time a "Made in Saxony" stickers where used wrongly so this might lead to some confusion. In this Millennium there was never a German Made Alien + Warwick Factory NEVER produced any Alien instrument.

Then around 2010 production was moved to Korea and a 5 String model was designed.
However there was never an actual run produced afaik but only some prototypes presented e.g. at Musikmesse in Frankfurt and NAMM.

shortly after (2011 or so) the production was moved CHINA followed by the first 6 String design and Wenge came back as fb wood.

Regarding thumbrest and soundhole decoration this was present always on all fullblown models.
However on the Chinese version rosewood has been replaced with plastic.

Hope this makes up for my unfriendly reply before

I need a 5-strings to convert to 8-strings.
Don't know how yet.

I have a lowly Vietnamese Rockbass Standard with an ebony bridge. I also put on those D'Addario strings I mentioned and they are indeed incredible.

If you don't mind a ridiculous nut width and have a full-blown Alien (with the replaceable metal tailpiece), it shouldn't be that big a problem.

Granted not on the Alien, but I put a set of those new LaBella gold copper tapewounds on a fretted ABG. A great alternative to the whole 'let's put thick long guitar strings on a guitar with a long neck' sound. It has the broken in sound and feel, with a bit of that 'acoustic' tone.

How would, and excuse me, a Stoll abg compare to an Alien of any form?

Dazed said:
How would, and excuse me, a Stoll abg compare to an Alien of any form?
Click to expand...

That's a good question, I wanna know that too.
But I guess, the stoll acoustic bass is much louder without an amp and a full bottom sound. The body is larger and it got a solid top. I'd love to have an alien 6 string with solid top.
A few years ago I tried an alien deluxe 5 string, but I ended up with a Stanford 61CM5 fretless. It's the same here, the Stanford has a solid top and had a better pure acoustic sound compared to the alien deluxe.

Took my Alien outside this Easter at our cabin; good times! 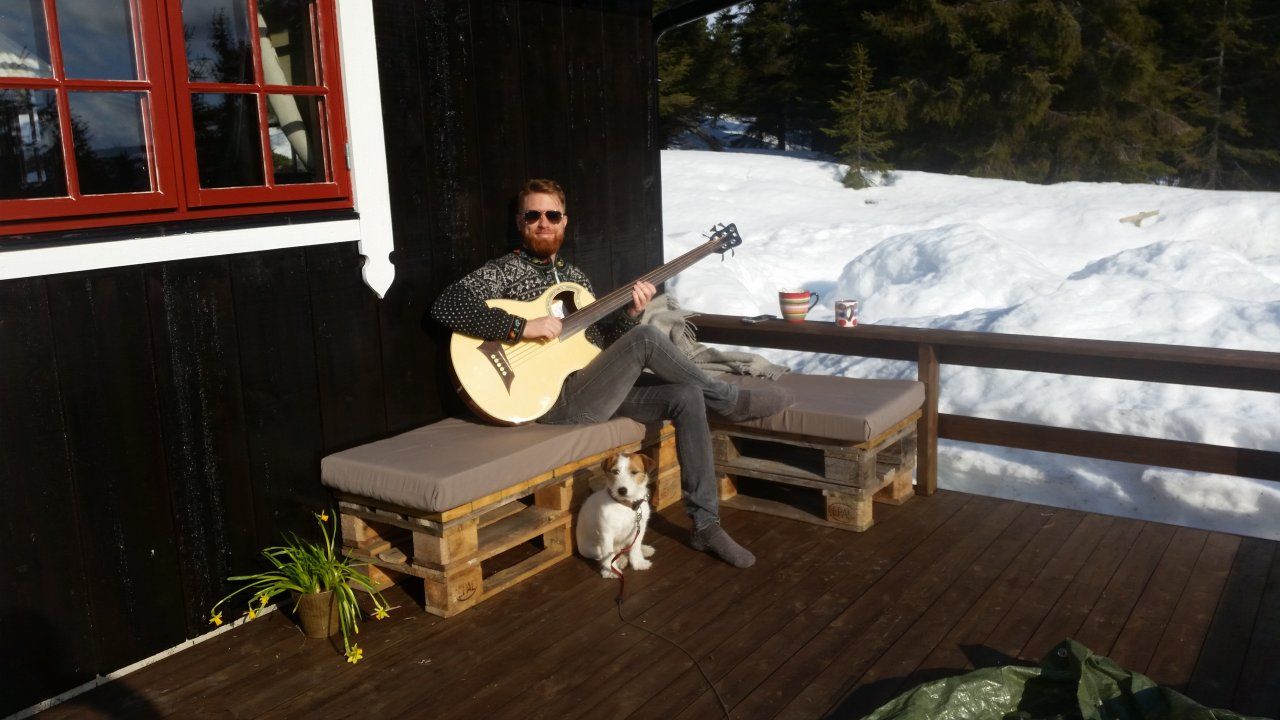 Casually enjoying good times! Am I right in my assessment that the last post on this thread was made in the summer of 2008??? Insane!

jester said:
Am I right in my assessment that the last post on this thread was made in the summer of 2008??? Insane!
Click to expand...

I just used the search function a bit too carelessly, I suppose. On the other hand, maybe we get to see some more aliens now?

By all means, I am all *for* thread necromancy!
C

I am looking to buy one... Anyone want to sell (german made)?